Baby Brass Knuckles – Proof of concept for taking a drawing and turning it 3d.

Here is a proof of concept that I have been working on being able to take a drawing or object and being able to take pictures of it, trace it, and then extrude it to being a 3D printed object. I had carved these WWII brass knuckes out of foam a long time ago out of foam with a knife. The intention of it was to be able to either do lost wax style casting or sand casting with the forge we made. I really just wanted to try out scanning something and being able to convert it to an STL file for printing in the cheapest and easiest way possible. It turns out, its not really easy or simple because you have to use an array of programs to complete it. 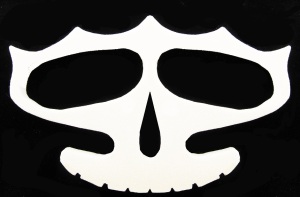 Alex took some high contrast pictures for me with a camera. This was very useful in the procedure for editing and tracing the image.

My goal here was to use free opensource software to edit and print something from a sketch. I have access to a lot of software using my university email but I wanted to show that it’s possible for free.

I then used Inkscape to process the image. It has some useful tracing functions to be able to be able to save a raster file into a vector file. In this case you can trace the image and then save it as an Autocad .dxf file.

After I had the image saved as an Autocad file I used the open source program Openscad to extrude the image into a 3d object. This program will also let you export your 3d object as an STL file.

Then after I had the STL file I can import it into Google Sketchup. This program is much more user friendly in editing and resizing STL files for me than most programs.

After that it is really easy to use skeinforge to slice up the model and print it.

I just printed a small one to prove the concept.